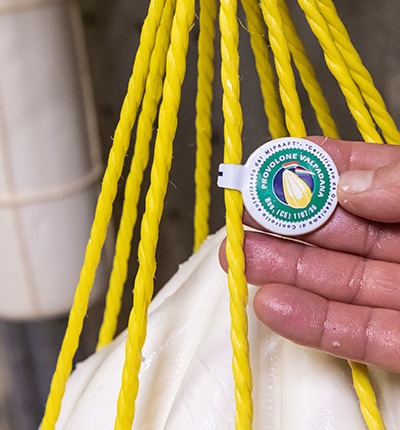 The brand of Provolone Valpadana P.D.O. is a cockade: a yellow shape on a green background

The brand that distinguishes the Provolone Valpadana is the cockade, attached to the rope that supports the shape. The same logo is also visible on all the product packages on sale.

The absolute guarantee of product quality and safety against all forms of counterfeiting.

The Consortium is the voluntary organization that protects the brand and verifies its conformity to the sale. It is the story of men and their purpose to get together in the name of Provolone Valpadana P.D.O..

The men are the ones in charge of the dairies where the cheese was and is made and the farmers who procure and supply the necessary milk from their cows.

Like all true stories, real, lived, it has not been really a walk, because gathering so many heads, we know, is not easy. But the men of Provolone Valpadana have succeeded in doing so and in advance of many other cheese producers, convinced that only compact and united you can create.

The conviction was already there when, in the mid-fifties, Provolone (which was still only called that) was recognized as a “typical cheese”.

At that time, the question of the production area was controversial (it was potentially the whole of Italy, but in reality the producers were concentrated in Lombardy, Emilia and Veneto), and the so-called production polymorphism of Provolone was also hesitant. In fact, Provolone can have very different formats

and various weights and sizes (from a few ounces to over 100 kilos).

The first turning point came in 1975, the year in which the producers of the Po Valley decided to become members of a single organism, the Consorzio di tutela, unlike other cheeses from Lombardy.

Three years later, in 1978, the Consortium was officially entrusted with the task of supervising, that is to say, from that moment on it was supervising all the producers that were part of the Consortium, but also non-members, so that they would respect the rules of the game and produce a Provolone according to the agreed standard.

For the then Consorzio Tutela Provolone another task began: the protection of the product and its defence against imitation, fraud and counterfeiting. From that moment on, nothing that might have seemed Provolone could replace that produced in Valpadana. And to ensure the authentic Provolone Valpadana P.D.O. a cockade with the trademark of the Consortium of protection: on the green background a yellow shape and the number of the dairy producer.

Since 2002 also the name of the Consortium has been renewed: it has become Consorzio Tutela Provolone Valpadana with new and qualifying functions to improve and protect the cheese.

The P.D.O. mark combines with the Provolone Valpadana brand certifies its origin

The symbol of Provolone Valpadana itself is accompanied on the shapes by the P.D.O. trademark, which is independent from the Consortium and is regulated by law. The red rosette on a yellow background identifies all those products with Protected Designation of Origin.

This acronym means that all stages of production of the product must take place within a defined geographical area.

In addition, the production process must comply with the canons defined in the relevant Specifications.

The recognition of the P.D.O. mark is regulated by law: the Ministry of Agricultural, Food and Forestry Policies provides a complete list of products that can boast the recognition. 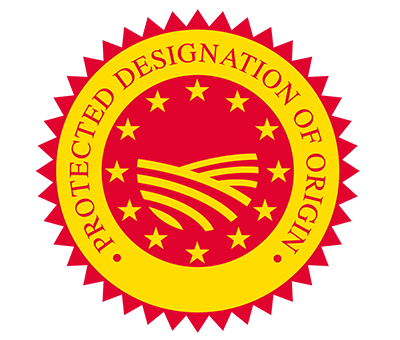